By Melanie Farmer on September 15, 2010 in Articles, Uncategorized 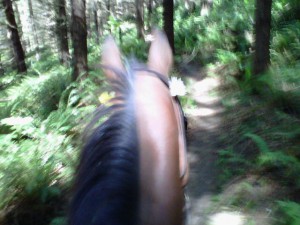 In the foot hills of Fall City, Washington, along the old Snoqualmie railroad grade, there is a great network of trails. On any given day, mountain bikers, equestrians, hikers and joggers, trace their way along the grade. Arteries of trails branch off the grade into the trees, rising quickly. One particular trail, followed after a thigh burning climb, flattens out, leading to an old logging road. As this road continues, more trails branch off; some climbing, others disappear into the wood, fern and blackberries.

Riding through these woods with Oakland, my 25 year-old gelding and retired racehorse, is meditation.  Oakland’s a Guru, teaching what the most gentle and noble gurus teach: how to be more observant, sensitive and compassionate.

Riding a familiar trail in the early morning last spring, Oakland taught me a lesson in awareness. During the depth of winter, we’d ride at noon. With the Sun directly overhead, the winter grey is brightest, tinted toward the extreme. Our rides though chilly, were sedate for the most part. The forest is more still during winter and with a cushion of snow, a greater hush falls.

Winter is a function of the earth’s tilt, angled at its greatest point away from the sun. Summer is the earth tilted toward the sun at its greatest point. The days of greatest tilt toward or away from the sun, is by definition, the summer or winter solstice. Winter solstice is the day with the least amount of light while the summer solstice is the day with the greatest. As the earth’s tilt shifted toward the sun and the light increased with warmer days, Oakland and I were out on the trail by 10 AM.

Danger on the trail

On one of those days last spring, following the same trails we’d ridden throughout the winter, Oakland startled and spooked at every turn. I searched him and myself for what was different. I wondered if he was in pain, if there was something affecting his eyesight. At some point, I understood the need to stop ‘riding’ and see what this horse was seeing. Quietly, I began to look through Oakland’s eyes and this is what I realized.

During the deepest part of our Northwest winter, the daylight is flat. It filters through the atmosphere, through a cloudy film that thinly blankets the trees. This light is homogenous, pasteurized. There is no shadow. This flat light allows one to exist in a dream state, never fully awake. This quazi-dream state is like an 80’s style circular switch that guards a room against either full light or complete darkness. Deep shadow does not exist for the lack of bright light and flaws are never fully exposed.

At the end of winter, moving toward spring, heat builds in the atmosphere. The methodical, ticking shift of the earth’s tilt generates a saturation point. What has remained hidden due to the flattened gray seems to suddenly appear. The fog burns off, clouds disappear, and sunlight streams through the trees at sharp angles, shocking the senses.

On that particular morning, those bright shafts of light fell on the mossy trees, fern and under brush, and by contrast, created weird undulating shadows and inky, dark shapes. To Oakland, these were no tricks of light; they were bears and cougars, lying in wait.

In Vedic philosophy, there is something called the pancaklesa, the five ‘poisons’ or obstacles to enlightenment. The first poison is to misperceive truth and reality, your basic form of ignorance. Oakland’s “ignorance” was to mistake shadows for predators. A reasonable mistake for a prey animal but one a horse and rider can easily remedy. Kind words and a gentle hand will sooth the nervous system. More rides through the same wood while the season stabilizes and the shadows are quickly forgotten. Not so for humans.

“Consciousness” is not a lifestyle

Humans will misperceive and then turn the mistake of consciousness into a life style or a belief system. One of the oldest metaphors used to illustrate this point is when a rope is mistaken for a snake. As a result and from that moment forward, the poor dupe who mistook the rope for a snake now acts as if all ropes are snakes. A better outcome might be to go ahead and grab the rope, ignorant of its true form and then once bitten, not make such a mistake again. Awareness realigned, enlightenment reached. Poison that does not kill us makes us stronger. At any rate, the mistakes in perception, one could say, are those of lighting.

Daily life is continuously subject to a misapprehension or misperception of reality and truth. To perceive clearly requires a quiet stepping back and a withdrawal of our sensory projection.  Observe carefully,  gently and from a neutral position.  Ask questions of ourselves and others about the nature of what we are experiencing.

In other words, how a situation or a thing is appearing, may not provide all the information needed to make a correct or balanced assessment. Judgments and assumptions most often come from not gathering enough information, from a projection of fear, a belief or past experience. Similar to believing all ropes are snakes.

A lesson from the trail

Take a lesson from Guru Oakland like I did that spring day; how we see ourselves, people and situations, change. Spiritual practices rooted in observation, withdrawal of sensory projection and compassion cultivate an internal light that is core to the heart. As the light of the heart brightens, it illuminates the consciousness. As a result, we will see shadows, our mistakes of perception.  We will see where we have confused beliefs for the truth and this is a good thing. Integration of shadow self is fundamental to becoming a healthy and whole human. So when the shadows fall as they will in practice and as the seasons change, act kindly and compassionately. Speak soothing words and gently hold your hands over your heart.   Be glad that you are awake and no longer sleeping.

6 Responses to Shadows, Light, and Horses.