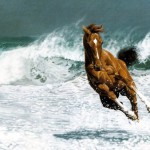 Secretariat won the Triple Crown in 1973, within one month of the Watergate scandal that exposed Nixon’s political indiscretions.  Secretariat’s racing career spanned Vietnam and the 1972 recession.

Sea Biscuit became the symbol of the underdog during the 1930′s depression, Roosevelt’s New Deal and the build-up to WWII.  Sea Biscuit was foaled in 1933 and ran his great races from 1936 to 1937.

Secretariat, Sea Biscuit and and the movie ‘Secretariat’ share remarkable similarities relative to the political and financial crisis of their time. What they share astrologically are transit patterns of Ketu in Gemini and Rahu in Sagittarius.

Secretariat of 1972 and Sea Biscuit of 1936 also shared Jupiter’s debilitation in Capricorn. In other words, the historical worst was yet to come in 1972 and 1936.

As for us in November of 2010, Jupiter is past his debilitation but his positive influence continues to be weak and this is what we are currently experiencing.

Jupiter is the indicator of wealth, growth and abundance and was seriously weakened in Capricorn during the fall of 2008.  Jupiter is now retrograding in Aquarius, a sign associated with meeting the ideals and desires of the individual within the public sphere.

After a short stop in Aquarius November 18, Jupiter resumes direct motion, transiting into Pisces December 5.  Jupiter’s movement from the air sign of Aquarius into the water sign Pisces is an initiation, the indicator and beginning of a big wave.

We’ve seen Jupiter’s wave effect in Aquarius at the recent mid-term elections but once out of the sign of public idealism and politic, Jupiter is back into his own water sign of Pisces.  Pisces is associated with great faith and the thirst of devotion but also gullibility and this is where Jupiter will be for the better part of 2011.

Jupiter’s nature is to spread and grow so while in Pisces, collective and personal finances will improve however slowly.  Saturn continues to cast a dry and withering glance from Virgo, delaying growth while demanding budgets and financial planning based in somber reality.

Rahu and Ketu are called shadow planets and are the points where the solar eclipse and the lunar eclipse occur.  Astronomically, an eclipse is when the direct light of the Sun and reflected light of the moon are blocked.  Astrologically, eclipses are points where upheaval and shedding occur within both the collective and person and as a result, the world and the individual state of mind can become very dark indeed.

Next month mid-December, we’ll have the last set of eclipses for 2010 in Sagittarius and Gemini. Sagittarius is optimistic and inspired but under Rahu’s influence, Sagittarius’s big ideas can over inflate and verge on fantasy. They may blow away like so much smoke.

Gemini  is communicative and sociable; loves to interact with others  but under Ketu’s influence, Gemini withdraws and becomes irritable.   As a result, Gemini maybe plagued with self-doubt and distrust.

The balance and stabilizing function is found through the Jupiter-Saturn transit axis.  Saturn in Virgo maintains tight order sorting ‘needs vs. wants’, holding the economic bottom line.  Saturn’s influence upon Jupiter in Pisces brings us a more sober form of hope and faith in the coming year.

Secretariat and Sea Biscuit were racehorses who inspired hope and imagination in the public during dark and challenging times.  ‘Secretariat’ the movie sets out to inspire and generate hope for us having passed through a dark period but not the hardest part of the race.

Positioning in a race, as all athletes will tell us, is imperative to either winning or losing.   Position yourself now to win. Create strategies for change and growth as we move into the spring of 2011 and continue to lighten up on material burden and debt.  Prepare to run a race where extra weight will only slow you down.

Remember the words of Secretariat’s owner, Penny Tweedy,”Life is ahead of us and we’ve got to run at it with everything we’ve got”.